Dobmac specialises in the design, manufacture, supply and service of root crop vegetable machinery throughout Australia and New Zealand.  Dobmac's outstanding reputation has been built on over 35 years of award winning experience and ingenuity.

Our signature and versatile, Dobmac Potato Planter, manufactured in Tasmania is well known, with sales now extending nationally and internationally.

Dobmac now offers a project management service for all your grading, processing and packaging needs.  Our staff liaise with clients from project conception, design, right through to an efficient, customised and integrated system.

Dobmac is proud to be the chosen Australian and NZ distributor for an extensive range of international vegetable planting, harvesting, processing and packaging manufacturing specialists.  You can be assured of the best outcome using only reputable equipment.

All machinery sold by Dobmac is configured to suit your specific environment. We work closely with you to have the equipment running at its optimum capacity.

Dobmac offers ongoing product support and a comprehensive spare parts department to keep you up and running with minimal delay.  We stock a wide range of spare parts and accessories to suit most makes and models of vegetable machinery, with new stock items continually arriving.

Philip & Judith Dobson began Dobson's Vegetable Machinery in Tasmania back in 1983.  A qualified boilermaker welder, Philip had grown up on a small farm near Ulverstone, Tasmania.  Looking for something to do whilst recovering from injuries, Philip was asked to modify some farm equipment for one of the local machinery distributors.  The work was a success and Philip found he enjoyed the challenge, from there the business grew into manufacturing unique agricultural machinery to suit the heavy soil conditions of the North-West Coast of Tasmania. The first machines manufactured were a range of single and two row potato diggers which competed with imported European machines. Modifications to imported potato harvesters and planters were also undertaken to better suit individual grower needs.  Our signature and versatile, Dobmac Potato Planter, is still manufactured in Tasmania today and is well known, with sales now extending nationally and internationally.

Over the years Dobmac has been an innovative pioneer, designing and perfecting machines where a niche or need was seen.  Some of our historical advancements include

Dobmac's success locally caused it to out-grow it's early premises twice in rapid succession, ensuring constant remodelling of the current property as well as workshop / parts distribution centres on the North and South Islands of New Zealand.  Dobmac has steadily grown over the years thanks to the support of local farmers who have assisted with research and development, field trials, and their invaluable feed back.

In 2003 Philip & Judith's son, Mark joined the company, first into technology, installing video monitoring systems to vegetable harvesters allowing operators greater visability and control.  Mark has since advanced into service & commissioning, sales and recently management.  Following his father's footsteps by steering the company into new and exciting horizons.  Currently employing over 15 staff in Tasmania and 3 in New Zealand, Dobmac is proud of its legacy of innovative equipment and exemplary customer service.

Dobmac is widely recognised in the agricultural industry for being an award winning and active member in the region.  By supporting both local and international field days, industry boards, training and conferences, Dobmac keeps abreast with advancements in techniques and technology.  As an active community member, Dobmac is pleased to sponsor and support Ronald McDonald House Charity and the UTAS Science and Engineering Department.

After nearly 35 years, Dobmac is proud to still be a family owned and operated business, with Mark Dobson as General Manager.  Over the decades Dobmac has adapted to changes in the global agricultural market and is excited to drive further efficiencies and productivity for the industry into the future.

In 2018 we're excited to have partnered with Grant Reith of New Zealand Tractors, Ashburton, to provide spare parts to the South Island of New Zealand.  Through NZ Tractors, clients can purchase parts and accessories for most makes and models of harvesters and supplied machinery using their Dobmac accounts. 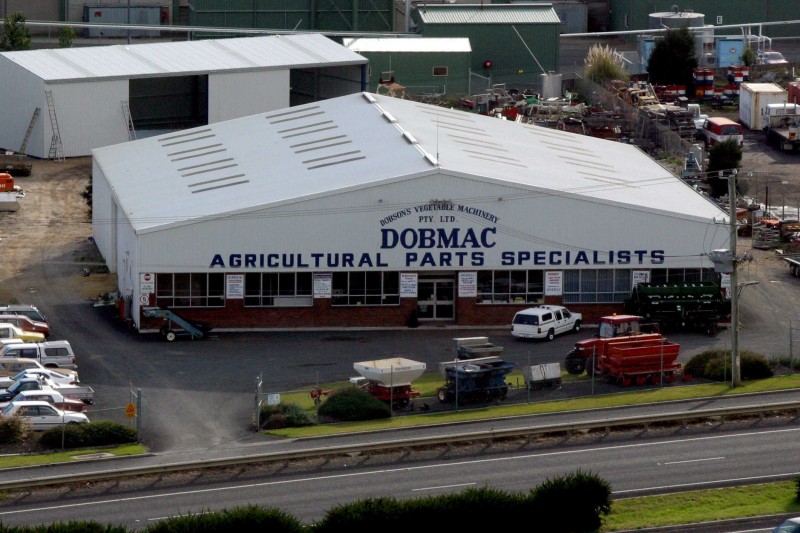